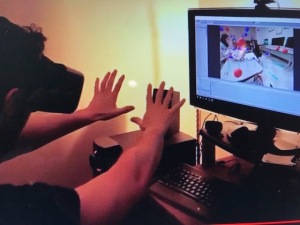 It’s such a topsy-turvy world right now that if you’re like me, it might take more than a little time spent viewing cat and puppy videos to elevate your mood. So I’m glad to share the story of Embodied Labs.

When I think about the future of health and wellness care for elders, one looming issue is how we can attract a broad and well-trained workforce to understand and help us through a gauntlet of serious illnesses or chronic conditions. So it is enormously heartening to learn about a group of young professionals who have dedicated themselves and their business to this work.

If compassion and kindness are rooted in the ability to “walk a mile in someone’s shoes,” Embodied Labs – which didn’t exist until 2016 — gives that dictum the ultimate technological boost. In short, it sits at the intersection of health care training and virtual reality storytelling.

Embodied Labs is a for-profit corporation, but it is very mission driven, according to Erin Washington, co-founder and head of customer experience. “We’re helping to build the world we’d like to see when we’re older,” she told me, adding that “we don’t consider ourselves a VR [virtual reality] company. We’re using VR because it’s the best solution to achieving the outcomes we’re aiming for.”

Washington’s professional background is in curriculum development. Carrie Shaw, CEO and founder, got her Master’s degree in biomedical visualization (which was once called medical illustration) in 2016. But it was their experience as family caregivers that provided the impetus for creating Embodied Labs.

Shaw tells the story about how she became a caregiver for her mother, diagnosed with early onset Alzheimer’s, and who also struggled with macular degeneration. She created a tool – a simple pair of eyeglasses with patches in two different places – to give her mother’s aides a sense of what it was like to see the world from her mother’s perspective. What if you could use science, storytelling and virtual reality to convey the experience of an aging person? Would that help health care providers, be they professionals, direct care workers or family members, become more effective and better at communicating, in their caregiving efforts?

Embodied Labs uses film combined with interactivity that literally enables a person to walk in the shoes of a person with serious health issues. So far there are three “labs” available to the company’s subscribers: “Alfred,” a 74-year-old African-American man who suffers from macular degeneration and hearing loss; “Beatriz,” a middle-aged Latina woman who has been diagnosed with early Alzheimer’s disease; and “Clay,” a 66-year-old veteran who has been diagnosed with Stage IV lung cancer and faces end-of-life issues and participates in hospice care.

Voice interaction is one element in the Beatriz Alzheimer’s lab. At one point, a person “embodying” Beatriz is asked to read a few

sentences; but the words come out garbled and make little sense. It conveys what it might feel like to try to communicate but to be unable to express what you mean.

For the Clay end-of-life lab, Washington’s research included spending two days in a hospice facility, shadowing members of the hospice team. The lab’s credits list 75 people, including actors, those who worked in production, post production and subject matter experts.

Creating a lab is a research and labor-intensive process. Once a topic is decided upon, staff members talk to subject matter experts as well as family members, then decide on learning outcomes they want to achieve. All of that goes into script writing. Then the film is produced.

At first, the company’s subscribers were mostly in academia. But now it has long term care and home health care companies on board. They’re also in talks with nonprofit organizations and with individuals who do corporate training; public libraries and Alzheimer’s groups represent other potential subscribers.

Looking ahead, Washington believes that in 2019 virtual reality will be more available and affordable for consumers, which could be a boon for family caregivers. And while Embodied Labs is focused on aging issues now, the company is looking at experiences of other vulnerable populations too.

So far, the company’s labs have focused on what happens to a person in his or her home setting. The next lab will focus on the transition from living at home to a skilled nursing facility. It will likely include such elements as difficult conversations, the family dynamic, how long-term care can meet a need, what’s different about an institutional setting.

Washington told me that “I would have laughed three years ago if someone had said you’d be starting a company.”

And I’d say, we should all be glad that they did.

Notes from the Forefront of Late-Life Care 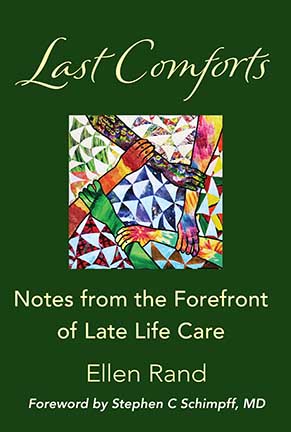